We often talk about Rebel PT as being…

“more than just a bootcamp”.

Sure, doing burpees and pushups is fun, but we’ve always wanted to be more than just that for our members. A community of people supporting each other and pushing one another, getting fit, active and out of our comfort zones whilst surrounded by a community we feel valued in. That’s Rebel PT!

Our community is made up of all walks of life, backgrounds, ages, fitness levels – you name it. Each member has their own story, their own goals and accomplishments. We are proud to call each of them a member.

So we thought it was time to highlight some of these stories and give some recognition to the people who help make Rebel PT “more than just a bootcamp”. 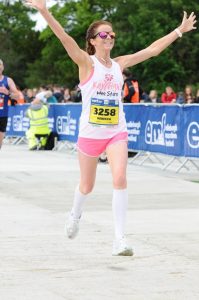 Starting with Rebecca (Bex), a strong presence at our Prams in the Park sessions for 3 years who’s helped foster an encouraging and competitive spirit while always remaining humble and supportive. Bex has been working hard on her running recently and is reaping the rewards, but what makes her even more impressive is how she’s overcome her fears and anxiety to get back into running.

She recently completed the Edinburgh Marathon and this is her story leading up to the event……..

“This will be my fourth marathon. Milan and Inverness are in the bag but in 2014 I attempted to run Edinburgh with a group of runners from Kayleigh’s Wee Stars. With a tough target time in my head, desperate to get a PB, I ran at a ridiculous pace for what I had trained for. Nothing felt right, it was a complete struggle and at mile 24 I collapsed, banged my head and knocked myself unconscious. With only two miles to go, I was zoomed away in an ambulance and left devastated. All those months of training and hard work for nothing.

I lost some of my memory for a short period of time after the race and had many tests done to see if they could discover why I had collapsed. After months of scans and appointments, they found nothing and could only presume it was my body’s way of telling me that it couldn’t cope with the pace I was going at, so it gave up.

After Edinburgh, I rarely ran, my love of running disappeared and I struggled to compete in races. I signed up for many races but always found a reason to back out last minute. After a few years of this, I fell pregnant and had our first daughter, Isabella. Desperate to try and get a little fit, I joined Rebel PT Prams in the Park class and attended once a week. While I loved the weekly class, Isabella was my first baby and I was always terrified of pushing myself too hard, just in case something happened to me. I had a great year with Rebel and managed a few training runs (nothing more than 5 miles and at a very easy pace). In 2017 I decided to sign up for my first race, I was feeling quite good and popped in an entry for the Great Aberdeen Half Marathon. Literally the week after I signed up, I found out I was pregnant with number 2! Great, another excuse not to do a race I had signed up for. In 2018 our second daughter Millicent was born. Number 2 was a huge game changer for me. Always wanting to be organised and on top of everything, I found my life quickly became nothing less than frantic with very little time to do anything for myself or see anyone. As amazing as it is being a mum, many times over the last year I have questioned my mental state.

After Millicent was born, I waited 8 weeks before returning to the Rebel Prams in the Park class and then another 2 before starting some light jogging. As the weeks passed, I very quickly found that these short runs that I made time for, left me feeling nothing less than amazing. That 20 minutes of getting out the house, with nothing more than a water bottle and some earphones, followed by getting fresh air in my lungs and some light exercise actually felt like having a full night’s sleep gifted to me on a plate. I just loved it. Each time I went out, it left me buzzing. Finally, my running mojo had returned and it left me feeling great! 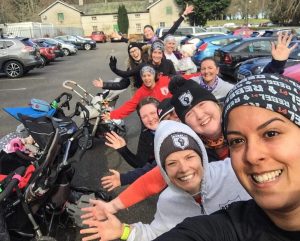 With the help of Rebel and the amazing community, over the past year, I have managed to slowly build my fitness back to what it was many years ago before I had the girls. Right now, I feel better than I have ever felt before. Running marathons is not something that I wish to take up again but what happened in Edinburgh in 2012 plays on my mind a lot and I don’t feel I can hang up my marathon trainers while my last race was left unfinished.

Turning 40 this year I have set myself a small challenge of running a race every month of my 40th year. In May the race will be Edinburgh Marathon. This is the time to settle the score with my Edinburgh demons, my final marathon.” 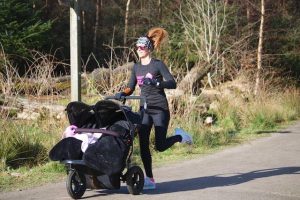 Bex ran the Edinburgh marathon for a Kayleigh’s Wee Stars, a charity set up in the memory of Kayleigh Cordiner. The charity provides financial support for families where there is a child with a terminal illness, allowing the families the opportunity to make precious memories together that they can cherish forever. Since the charity began they have raised £750,000 to support families throughout Scotland.

Good news is, Bex SMASHED the Edinburgh marathon this time, in a time of 3:22.10. Overcoming her mental and physical challenges while always being on hand to encourage and support her fellow Prams members.

A great example for all on the positive impact exercise and fresh air can have on mental well being and how to overcome your demons and smash your goals. This could be for a marathon, a 5k, a prams boot camp or just a walk! Everyone has their own goals and their own motivations.

Now get out there and get yours! 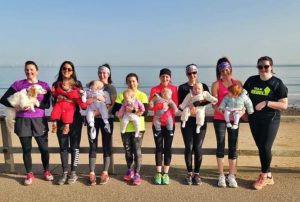 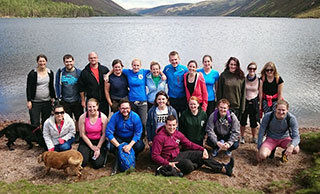